Building an architecture to implement a SaaS model

NextSourcia is a web hosting and development company whose flagship solution is AquilaCMS, an open source e-commerce CMS developed on a ME*N stack.
One of the projects we had to implement in the last few months is the provision of a hosting offer on our shop, allowing the installation of our AquilaCMS solution in one click.

Why use the SaaS model

To carry out this project, we used the SaaS model, which stands for Software as a Service. This means that the software is not installed on the user's machine but on a remote machine. In our case, this translates into the installation of an AquilaCMS on our servers, at the user's request, which corresponds perfectly to the hosting offer we wanted to set up.

The implementation with Docker

We opted for an architecture based on Docker images and an installation on our own servers, without using an external service. This has two advantages: to reduce network latency as much as possible by having control over all the servers used and to have control over the entire architecture to optimize it as much as possible according to our needs. In this project we use Docker in a "vanilla" way, without extensions and without orchestration like with Kubernetes. This way of doing things can also be practical in cases where the use of an orchestrator (or container-orchestration system) is not possible.

Dynamically deploy an application and its MongoDB

The first need of this architecture is to be able to deploy our solution and a MongoDB database at each hosting request. For this we have developed Bash scripts that launch Docker containers from a docker-compose.yml file and environment variables.

The environment variables are placed in a .env file in the same folder as the docker-compose.yml. Here we have the ID variable which corresponds to the name of the shop given by the user, PORT_AQL which is the port of the AquilaCMS container and PORT_DB which is the port of the MongoDB container. We can note the declaration of a volume outside the mongo service because it is the only way to use a variable in the name of a volume. Finally, we create an external network that is specific to each pair of AquilaCMS and MongoDB containers.

Managing the ports of the hosting server

To know the ports on which the containers will be launched, we have set up the management of a CSV file in our scripts : at each hosting request, the file is browsed and the first available port is retrieved, then a line is added in the CSV for the AquilaCMS container and another for the MongoDB container.
For example, we have in our file :

Port 8005 will be retrieved to launch the AquilaCMS container and port 8006 for the MongoDB container.

Communication between the shop and the scripts

To communicate between the shop and the scripts on the hosting server, we use a REST API, which allows us to call the scripts even if the shop and the hosting are not on the same server, all in a secure way. For this API, we use another of our projects that was released as open source: Aquila Probe, but any API that interfaces between an HTTP request and the execution of a script (via the Node.js child_process module for example) is sufficient. 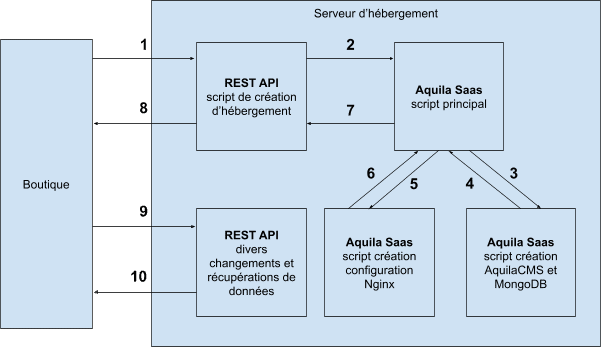 To delete a hosting, you just have to go back to each of the points mentioned above: the creation of the AquilaCMS and MongoDB containers, the creation of the Nginx configuration file and the insertion of the port information in the CSV file. In a deletion script, you then have to stop and delete the containers that correspond to the right user (docker stop and docker rm) and delete the network on which the two containers were (if no other project is on the same server, a docker system prune --all may be appropriate to be sure to delete all traces of this hosting). Then just delete the Nginx configuration file and delete the user lines from the CSV file (can be done with the sed command for example). 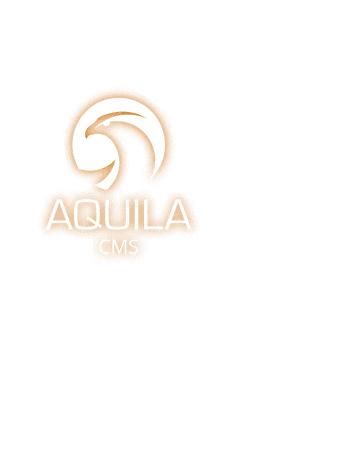